Unlike 75% of series I’ve started reading, I actually finished this one!  Thoughts on books 2 and 3 of N.K. Jemisin’s Inheritance trilogy follow.  Warning:  there are some spoilers. 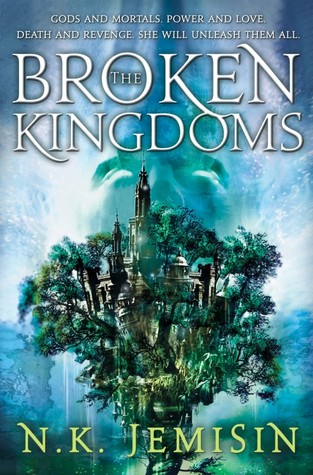 When we left Yeine in book 1 of the series, there had been some major challenges to the structures of power in both the god and mortal realms.

One of the mortals making sense of the events of book 1 is Oree, a blind artist who sells her goods in the literal lower level of the capital (in a brilliant move, Jemisin has the Arameri section of the capital literally float above everyone else).

This story is more of a mystery as Oree attempts to figure out why, as a mortal, she is in possession of some god-like abilities as well as who is responsible for a series of godling murders in the city.

Oree is cool, but not anywhere near as cool as Yeine.  Additionally, the god who gets the most attention in this volume is Itempas, that unyielding asshole who killed his sister and enslaved his brother.  You might think that after being stripped of his powers, banished, and forced to prove his worthiness as of the end of book 1, that Itempas might be a more sympathetic character.  But nooooooooooooooooooooo, he’s still a dick and does nothing to earn the kindness Oree shows him.  There’s also a rather heartbreaking murder that might make you uncharitably think Itempas should have died instead, even though that’s not how murders work.

Overall, this one feels like a bit of a repeat of book 1 but with less interesting characters, and a mystery that is solved too early.  Add to this a surprise baby plus the fact that I just cannot stand Itempas, and I really didn’t enjoy this one.

The Kingdom of Gods 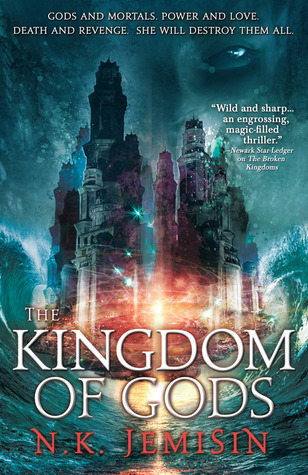 Shifting perspective yet again, we get our first book in the series narrated entirely by a godling, Sieh.  If you pick up this series, you will immediately recognize Sieh as the trickster figure of the gods.  He frequently adopts the form of a child and maintains a playful innocence, though he has certainly caused as much death and destruction as any of his other godling siblings.  Unfortunately, Sieh’s appearance means a lot of really disturbing things happened to him while he and the other godlings were enslaved.  So, rather interestingly, Sieh is perhaps the only god in fiction who is a survivor of sexual abuse.

As book 3 opens, Sieh has bonded with Arameri siblings and sworn enemies Shahar and Deka.  Remember how the Arameri are the ruling class who enslaved the gods in book 1?  Yeeeeeeeeeeeeeeah.  I think what’s most annoying about this book is how unclear the timeline is; it’s definitely been some time since the events of book 1, but I could never figure out how much time has passed.

Anyway, as Sieh makes a vow to be to be Shahar and Deka’s bff, he suddenly loses control over his own actions and his status as a godling.  As a mortal, Sieh now must contend with aging and the possibility of his own death.  He also gets betrayed by every.  Single.  Mortal.  In this book.  Yet is still completely blindsided every time it happens.

The biggest takeaway for me here is that you can be a centuries-old god and still not understand people.  I feel you, Sieh.

Will Sieh regain his immortality?  What’s up with someone murdering Arameri?  Could this be connected to Sieh’s mortality?  And, of course, will he sleep with one sibling, two, or none of the above?  Will you care or will it take all of your willpower not to cross out all of the parts with Shahar and Deka?

As a whole, I found the plot of this one more confusing than the first 2 and just didn’t care about Shahar or Deka at all.  The character who I found most intriguing was Oree’s daughter, Glee, who unfortunately is a somewhat minor character.  It makes me upset she wasn’t the focus of book 2 instead of Oree, or had her own book at some point in this series.  I can dream.

Yeine isn’t nearly as present in volumes 2 and 3 of this trilogy, which is one of the biggest reasons I didn’t enjoy the other 2 books nearly as much.  Same goes for Nahadoth.  And though there isn’t a character without flaws in this series (which is a strength for sure), it was still disappointing to see them make bad and even cruel decisions, especially in book 2.  Additionally, there are really no good alternatives to get attached to—none of the other mortals are that interesting, and don’t even get me started on Itempas.

Perhaps what pissed me off most is that Itempas never really seems to earn his redemption.  His essential nature doesn’t change because he’s a god…but I feel even gods shouldn’t be allowed to be such giant assholes.  How does he still have followers???

However, I will say this series is truly original and completely subverts expectations.  One of the big themes is the cyclical nature of everything, which is reflected in Jemisin leaving a lot unresolved.  You will either appreciate that or it will drive you slowly insane.  Or both.

I LOVE the first book and definitely recommend.  I think it stands up well on its own, though you will probably be left wanting more Yeine/Nahadoth.  Sorry, but you won’t find it in the sequels.