Bad, United States.  Bad, bad United States.  For once, I’m not talking about the current state of our political affairs.  What is truly disturbing is the way some absolute gems of international cinema slip through the cracks and take months (if not years) to become widely available to a US audience, especially if we have to (god forbid) do some reading while we watch.  That explains how it took so long to get around this week’s film, which is beautifully bittersweet.

Bar Bahar (In Between)

3 Palestinian women sharing an apartment in Tel Aviv attempt to navigate the forces of tradition and modernity on their lives and future plans.

Leila comfortably bucks tradition, layering on the makeup for her job as a lawyer, and layering it on even thicker for nights at the club.  She is unapologetically living life to the fullest and reveling in her single glory. Her roommate Salma enjoys a good party too, but leads a double life.  Hailing from a small-town Christian community with a family planning her arranged marriage, Salma struggles to hold down a job but tells her parents she’s a teacher.  As it turns out, Salma is also keeping her sexual orientation a secret–she is a closet lesbian, which is…probably (definitely) going to cause some tension.

Throw Noor into the mix–a shy computer science student who wears a hijab and hails from a devout Muslim family–and there are bound to be some roomie fights over more than whose turn it is to wash the dishes. Suspecting judgment from Noor and her fiance, Wissam, Leila and Salma are less than welcoming.  It’s not long before Leila and Salma realize Noor is an incredibly caring person and bond.  Though Wissam would like Noor to stay at home once they are married, Noor is not the traditional woman she appears to be.  She focuses on her studies but seems interested in the group of friends partying in the apartment on a regular basis. 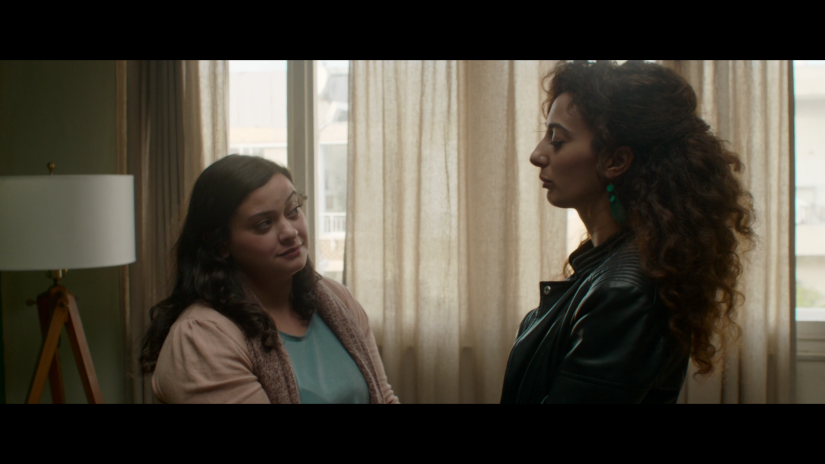 One of the new faces in the group is that of Ziad, a cute and forward-thinking guy who Leila falls for.  She is contentedly in a monogamous relationship for the first time in a long while.  However, Leila wonders how progressive Ziad really is when he avoids introducing her to his family…unless she starts to make changes like giving up smoking (and for the first time in recorded history I say DON’T DO IT, GIRL).

Meanwhile, Salma has started a new job as a bartender, which is (conveniently) a great way to meet ladies.  After meeting Dounia, Salma brings her on a visit home for moral support, which can only end well, right…? Noor’s story takes a heartbreaking turn when Wissam turns out to be manipulative, controlling, and violent.  Luckily, Noor has her newfound friends to lean on, and the trio plots a way to get Wissam out of their lives for good.  Even after their plan is successful, will these friends be able to move forward, or will they forever be stuck in between?

Predictably, my favorite thing here is the relationship between the 3 women.  Though they don’t bond immediately, they do learn to appreciate the parallels in their lives and the challenges they face.  All 3 experience instant judgment based on their appearance and face scorn from different social groups.  They all must learn to live with many sets of identities and expectations and in the spaces in between.  (On a side note, they all have different body types that aren’t commented on–they just exist.  In the world!  Like women’s bodies do in real life!)

The idea of living in between works on so many levels here–between tradition and modernity, Israel and Palestine, work and marriage, family and self, law and justice, freedom and safety.  This idea lingers; there is some definite progress made by each of the ladies in terms of self-identity, but that doesn’t necessarily drive their lives forward as a whole or indicate they will have more control over their lives or self-expression.  Though a feminist film, we as an audience reflect on how far we have to go rather than how far we have come.

Would my blog wife join this posse or ditch without paying her rent for the month?  Find out by reading her review here!

Appropriately for March Madness, this week’s film is about what happens when petty, short-sighted megalomaniacs control frighteningly destructive weapons in ways that are in no way reflective of the reality we currently live in.

With Iran and Israel on the brink of nuclear war, it’s up to two teen girls, a hacker, a German, and a falafel truck to save the world.

Present-day Israel.  Secret underground bunker.  Scale model of the desert with…toy planes?  Though all of the elements of a spy thriller are there (including sinister eye patches and intimidating beards), it’s clear early on that the men assembled are a bunch of bumbling fools.  Unfortunately, they may be just unhinged enough to end life on Earth as we know it.

Convinced of Iran’s plans to unleash nuclear war, the Israeli military decides they must strike first with their own secret nuclear weapons.  The catch?  They have only a matter of days to strike, and must first survive a visit from a UN-type committee examining their nuclear facilities.  The plan is to fool the inspectors and then proceed to annihilating Iran (and likely a significant chunk of other countries in the process).

Since we’ve taken care of the “atomic” part of the title, on to the falafel.  Mimi and her teenage daughter, Nofar, run a falafel truck whose main business comes from following the military around during maneuvers and offering the only meal option for miles around.  Pretty nifty strategy.

Helping with the business is taking a toll on Nofar, who is falling behind in class,  letting her short temper get the best of her, and making no progress with her cautious hacker boyfriend.  In an effort to distract Mimi from her daughter’s shortcomings, Nofar is determined to set her up with a new man.

Enter Oli, stage right–the German member of the visiting committee and, coincidentally, the only moderately good looking one.  After Mimi’s overly spicy food sends Oli to the hospital, he conveniently recovers at her house.  While Mimi and Oli bond, they are unaware that the Israeli government wants Oli out ASAP, even attempting to blackmail Mimi into persuading him to leave.

Meanwhile, Nofar has befriended Sharareh, a teen girl who has recently moved to a small town in Iran.  Initially trying to get help with her family tree project, Nofar really connects with Sharareh and discovers she’s an aspiring rapper.

It just gets even more bananas from here on out, with government officials hacking into Nofar’s Facebook account in an attempt to humiliate her.  She gets the last laugh when a CD with important codes falls into her hands.  That is, until she realizes that just as Israel plans to strike in a matter of days, Iran will do the same.  Worse, Israel will strike Sharareh’s hometown.

How will this group of meddling kids prevent nuclear disaster when they’re the only ones acting like adults?

Taking many cues from Dr. Strangelove, this film is a fun, silly romp.  I half expected several characters to tear off their masks to reveal Peter Sellers.  However, this is significantly more optimistic with some moments of very dark humor and absurd satire.

This may also be the most positive depiction of social media I’ve ever seen on screen.  Facebook and even this sort of Chatroulette type thing where Nofar and Sharareh meet have the power to bring people together across difference here, rather than devolving into the usual festering mass of extremist hate groups we all know and love.

I should’ve jumped on this film when it came out as it would’ve been funnier 3 years ago–or really at any point when the US leadership wasn’t threatening other unhinged narcissists with annihilation every other week.

I honestly do believe if anything can bring us world peace, it’s falafel.

Would my Queen of Falafel go back for seconds or push the big red button instead?  Read her review here to find out!