I love a good theme month, but after some challenging themes lately, nothing feels better than picking whatever films catch our fancy. That’s right–September is another month where we just do what we want on the Blog Collab. Face it: some of our picks are going to be cheesy as a French grocery store, like this week’s petit slice of fromage.

After winning a New Zealand inn through an online contest, career woman Gabriela has her work cut out for her as she renovates the building.

Gabriela is a driven, career-oriented San Franciscan determined to save the planet. Despite being a member of the soulless corporate world, she is committed to projects that move forward green, sustainable housing. Though in a long-term relationship with her boyfriend, Dean, he is unwilling to settle down or even leave some of his clothes at Gabriela’s place.

Her life changes dramatically when her company fails and she finally pulls the plug on her stale relationship. After impulsively entering a contest to win a small-town New Zealand inn, Gabriela is set to make her dream of a fully sustainable residence a reality.

Like other recent events in Gabriela’s life, this is going to be more difficult than it first appears. After arriving in rural New Zealand by bus, Gabriela searches for cell phone reception to call for a ride. Unfortunately, she loses control of her suitcase, which is set for a collision with a stranger’s 4-wheel drive. Though the kiwi is friendly and offers Gabriela a ride into town, she is having none of it.

The inn is, of course, nothing like Gabriela anticipated. Once a beautiful building, it has fallen into a state of disrepair (complete with unwelcome resident goat) and requires some major renovation work. Passive-aggressive Charlotte, owner of the town’s only operating B&B, is more than willing to swoop in and buy the property, but Gabriela is determined to see the project through.

Good thing she already knows a guy who is a contractor, Jake; bad thing he’s the guy whose car she hit with her suitcase. Embarrassed by their first meeting and ready to prove she doesn’t need help from anyone, Gabriela decides to fix up the inn all by herself.

In the mean time, Gabriela manages to befriend the married coffee shop owners, Peter and Anaaki, as well as Shelley, who runs the gardening center. After falling ill with a cold, Gabriela learns how quickly gossip spreads in the town, and that her business is everyone’s business. Her new friends, along with Jake, arrive to take care of her and complete some of the much-needed DIY work for the inn.

Recognizing the extent to which team work makes the dream work (ugh), Gabriela partners with Jake to rehab the inn and sell it, sharing the profits. As she gets to know Jake, Gabriela realizes he’s a gentle soul with a tragic past, and the two share a bond.

However, as the renovation is close to complete, Charlotte seizes an opportunity to get Gabriela out of the picture and claim the inn for herself. When she secretly invites Dean to New Zealand, he brings along a surprise: an Australian real estate agent interested in the property. Is this still the way Gabriela wants the story to end?

This film is predictable to a fault and painfully sweet at times; truly, the Netflix version of a Hallmark Channel original movie. But the likeability of our leads, particularly Christina Milian as Gabriela, elevates this from a dull slog to a charming (if forgettable) feature. Gabriela as a character manages to be the stereotypically uptight rom-com lead without being so completely rigid as to be a caricature. She also has the power to experience growth, though her journey doesn’t focus on how finding a man has changed her life utterly (thank GOD).

The quirks of small-town New Zealand also help, as well as its friendly, untroubled residents (and their accents!). In other contexts, the environment could feel like Pleasantville, with darkness hiding under all of the sunny smiles, but the celebration of small-town life seems genuine here. The film is so in love with New Zealand and its cute little towns that it felt at times like one long commercial to draw tourists to the area. And, you know, I’m not mad about it.

There are certainly subplots that are unnecessary, like the WWI-era letters Gabriela and Jake find hidden in the inn’s walls. And it’s ridiculous that Jake is not only a contractor, but also the chief of the volunteer firefighter crew (and former coach for the children’s rugby team). The only way he could have been more fully the poster boy for rugged masculinity is if he also carved chainsaw sculptures in his spare time or smoked his own penguin jerky over an open fire.

Does my darling blog wife believe all this one needs is a fresh coat of paint or is a complete demolition in order? Read her review here to find out!

It’s almost March, meaning Feminist February is drawing to a close.  I’m sad the month is ending, but happy to report we’re wrapping up this month on a positive note with dramatic break-ups, surprise Kiwi cameos, and all of the ’90s vibes you can stand.

Two best friends find their relationship and shared business venture in jeopardy when clients get too close and an ex arrives in town.

In addition to being besties, New Zealanders Mel and Jen are business partners in a rather unique profession.  Their job?  Deliver bad break-up news for those who go to extreme measures to avoid it themselves.  The duo can hardly be faulted for lacking creativity; their methods include song and dance, fake deaths, police investigations, and surprise pregnancies.

Though a rather cynical line of work, Mel and Jen run a profitable business and enjoy living their best lives free of romantic entanglements. 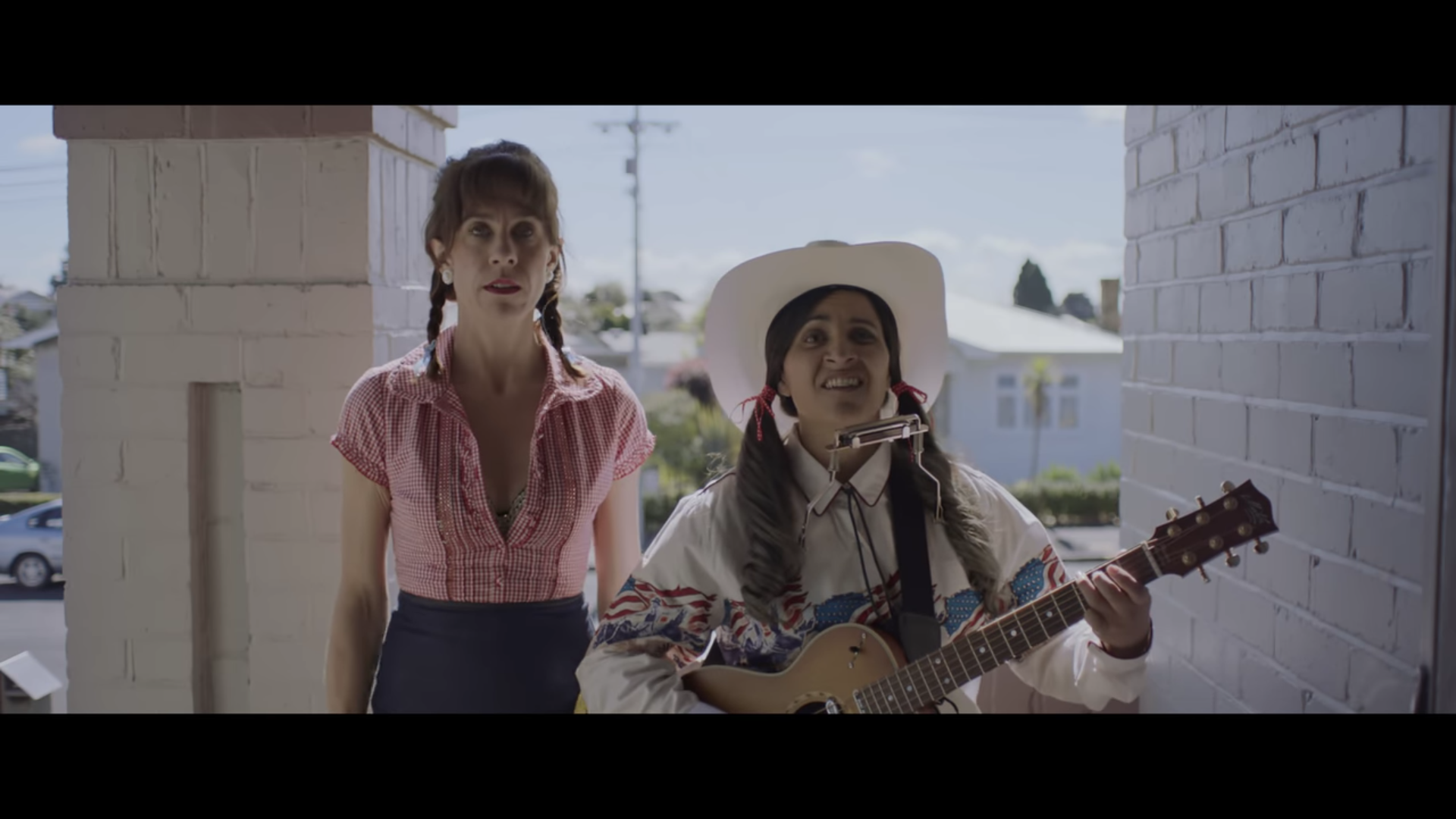 That is, of course, until the day everything changes.  After Jordan, a sweet but clueless client, walks into the office, he disrupts the usually reliable business model.  Mel feels guilty for using Jordan’s unhappiness to make money and happens to find him quite attractive too.

Complications abound when Jen’s ex, who also seems to be the one that got away, arrives back in town.  His presence surfaces tensions between Mel and Jen as he was dating both women secretly when he broke Jen’s heart.

Despite Mel’s misgivings about the latest breakup case, the duo arrives at Jordan’s rugby match to cause a scene.  Jordan’s girlfriend Sepa is a tough lady, and not one to be trifled with.  As a result, when Mel pretends to be Jordan’s pregnant lover and Jen his mother, the plan does not go as expected.  However, at the end of the day, Jordan is single and Mel is free to have a fling with him. 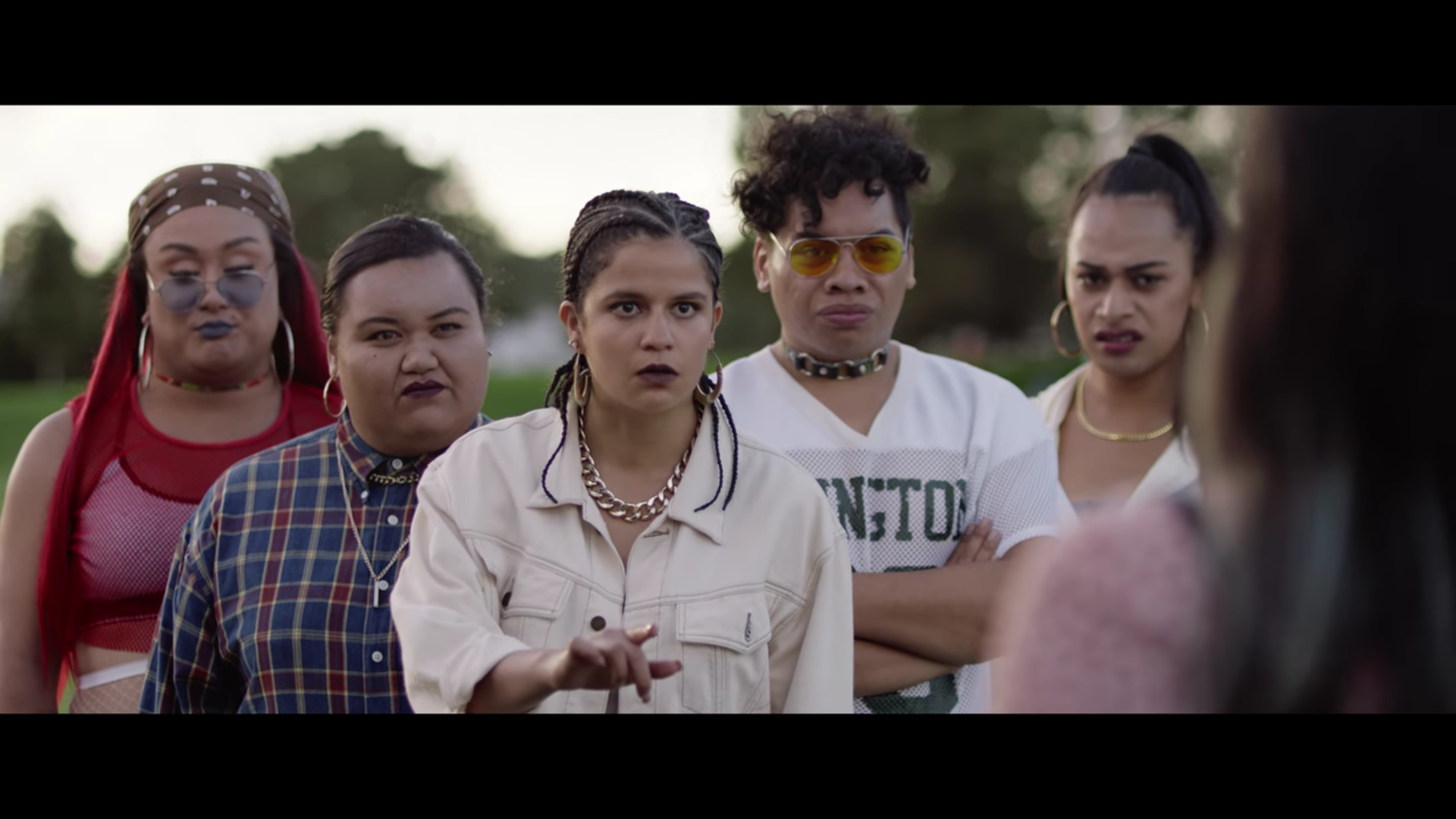 Meanwhile, the ladies’ history catches up with them as a client’s girlfriend approaches them at lunch for an update on her partner’s disappearance.  Mel and Jen demonstrate an impressive commitment to keeping up the facade that they are cops investigating the case, going so far as to show up at the police station in full uniform and posing as birthday strippers for a real cop.

Inevitably, the true nature of Mel and Jen’s work is revealed, leaving Mel feeling guilty.  A fight between our dynamic duo about Mel becoming too attached to clients and Jen avoid feelings altogether finally breaks up the band. 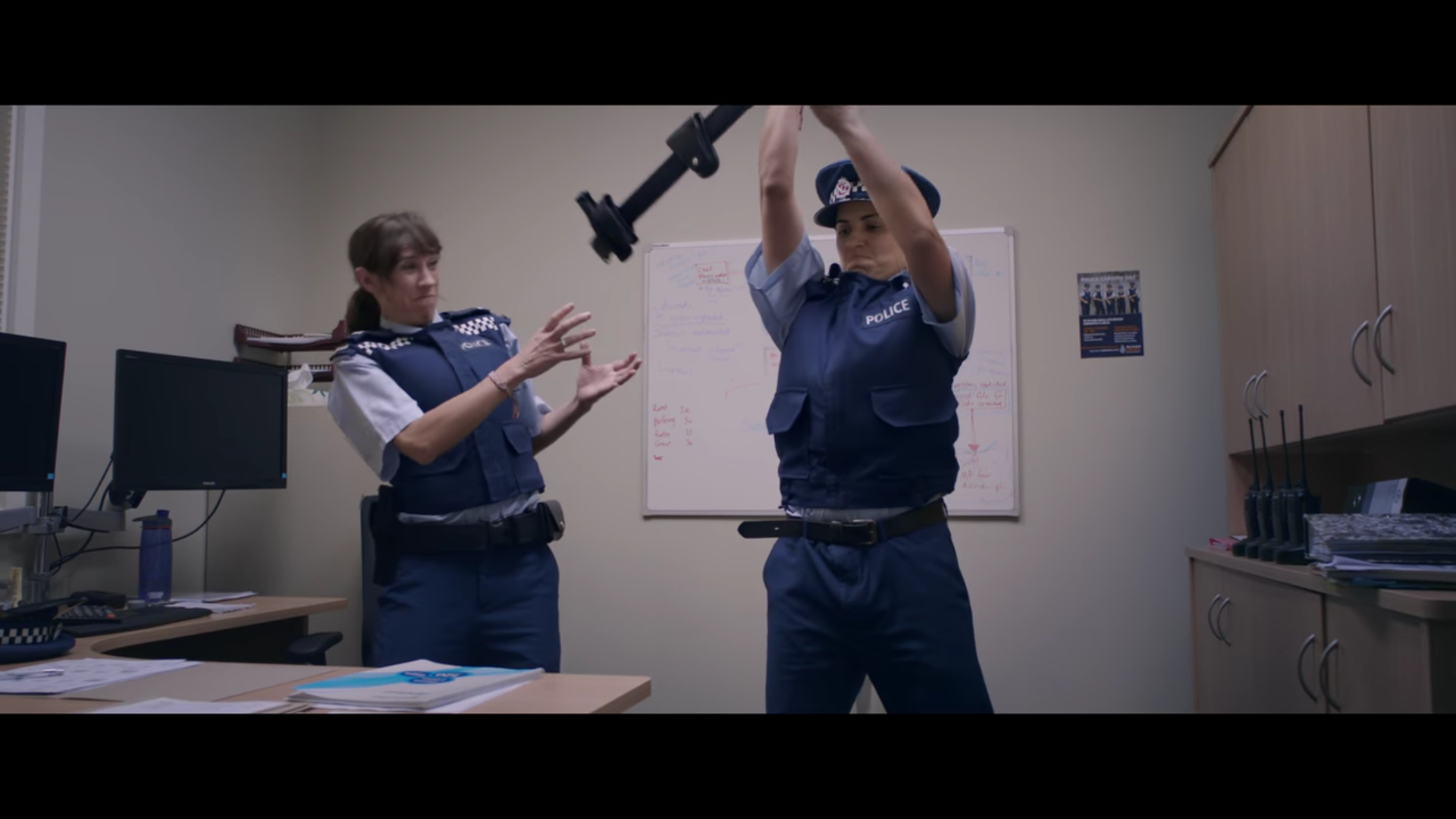 As both Sepa and Jen have been ditched and want their partners back, it’s time for a grand gesture to prove their devotion.  But is an expertly choreographed K-Ci and JoJo dance routine enough to heal old wounds and reunite these former besties?

I feel this movie was made for the Blog Collab.  Obviously the pro-friendship/anti-romantic themes are everywhere in some of our favorite picks.  Also the weird, offbeat humor had me in tears.  Mel makes an especially cringeworthy joke about a superhero named Vulvarine during dinner with Jen’s parents that cracked me up.

My only criticism here is that Mel’s bisexuality seems to be mentioned purely for laughs.  I got tired of all of the jokes about Jen and Mel being romantically involved.  Friends, lovers, life partners–who cares?

Though this is not a musical, we get not one, but two incredibly ’90s-influenced song and dance numbers.  The first one, set to a Céline Dion song, is everything to me.  I pray to the powers of the universe that the next film with our two stars is a musical or just a series of music video parodies.

I love both of our leads, Madeleine Sami and Jackie van Beek (who also co-wrote and directed this film), but honestly Ana Scotney as Sepa steals the show.  She manages to inhabit the tough girl stereotype while lending the role a vulnerability hidden beneath the surface.  Sepa also gets my absolute favorite line of the film when the breakup with Jordan throws her for a loop:  “All the times we played Dragon Ball Z–does that mean nothing to you?”

Speaking of this film’s cast, there are some delightful cameos here too.  I know you can just Google the cast, but the fun of these appearances is in the surprise.

Is this my blog wife’s bff for life or would she hire the breaker upperers to make sure she never has to face it again?  Find out in her review here!