I’m so happy it’s Horror Month on the blog.  Not so happy that this week’s film features incredibly creepy children, but you can’t win ’em all.  At least we’ve got some fab ’60s style to go along with it.

Alice is a 1960s mom trying to make ends meet–so what if that involves tricking people into believing their deceased relatives are communicating to them from beyond the grave?  As far as I’m concerned, Alice earns every penny as she’s put some serious creativity and intense detail into the whole endeavor.

Since the death of her husband, Alice is raising moody and extremely skeptical Lina, along with the younger Doris, who desperately wants to reconnect with her father.

One evening, Lina and her rebellious friends bust open the liquor cabinet and use a Ouija board to talk to the spirits of the dead…spooky!  Despite Lina’s eye rolling, the group is genuinely freaked out until they are interrupted by the arrival of parentals.  After a stern talking to, Alice concedes that Ouija is all the rage and decides to add it to her skill set.

Meanwhile, Lina has agreed to attend the Homecoming dance with her friend Mikey.  When Mikey comes over to walk Lina to school, Alice gives him a stern talking-to and makes sure he understands how short his lifeline will be if he hurts Lina in any way.

At school, Doris is tormented by a couple of nasty little boys.  The head of their school, Father Tom, manages to earn some major points with Alice when he intervenes and cheers up Doris.  Though there seems to be something between Alice and Father Tom, it’s too bad since he’s married to the church and such.

As she practices with the Ouija board, Alice makes the rookie mistake of using the board alone and doesn’t say goodbye to the spirit.  Things get eerie when Doris begins responding to Alice’s questions from the 2nd floor of the house…creepy!  Even worse, Doris completes homework in beautiful cursive with the help of her “friend.”

Though skeptical at first, Alice begins to believe Doris is able to speak to the dead when she claims her father is communicating with her, providing details Doris couldn’t possibly know on her own.  After finding a hidden stash of money and saving the house from foreclosure, Doris and her new talent prove very lucrative indeed.

However, it should surprise no one when Doris gets even more fucking creepy, using her mind to turn a bully’s mean prank against him, describing in detail to Mikey what it’s like to die by choking to death, and sewing a doll’s mouth shut to stop the voices.  Give that child over to the state, lady.

After Lina brings Father Tom’s attention to letters Doris has mysteriously written in fluent Polish, the priest visits the house in the guise of connecting to his deceased wife.  What this Ouija session reveals is the frightening and rather confusing truth about who is really reaching out from the other side.

How many will still be on the side of the living by the time the credits roll?

This isn’t a bad film, but doesn’t strike me as particularly memorable.  Initially quite watchable, the amount of time spent on setting the scene becomes tedious after a while.  Even though we spend a lot of time with our main 3 characters, I still didn’t really care about what happened to any of them.

I do love a period drama, though, and the ’60s details are absolutely gorgeous.  Doris is ridiculously creepy, but it’s not enough to hold the film together.

Would my blog wife’s spirit possess this one or search for a more worthy host elsewhere?  Find out in her review here!

As an absolute garbage month this year, September can go die in a dumpster fire as far as I’m concerned.  Praise be to all that is unholy it’s once again the most wonderful time of the year:  the month of October, Halloween, and…uh, Mean Girls Day?  You know what that means for the blog:  horror, horror, horror.  Let’s dive in, shall we?

After a Ouija board session gone wrong, 15-year-old Veronica must keep her younger siblings safe and send the demon she accidentally summoned back where it came from.

The following events are based on a real police report filed in 1991 Madrid, as our film cautions us right out of the gate.  Oooooooooh, spooky!

Though Veronica is just 15 and still in braces, she is the main caretaker for her 3 younger siblings.  Since Veronica’s father died, her mother works long night shifts at a bar, leaving Veronica to get her siblings up and ready for school.  Some days go better than others, depending on Veronica’s alarm clock and the level of her siblings’ brattiness.

The Catholic school Veronica and her siblings attend is all abuzz about the upcoming solar eclipse.  Ominously, Veronica and her friends plan to contact her father using a Ouija board while the rest of the school views the eclipse.  And of course they have to call upon spirits in the creepiest space ever that for some reason is easily accessible to pretty much anyone who can climb down a few metal rungs and is not considered a safety hazard???

I’ve got to say, this made me so nostalgic for the days of actually using giant hulking reference books–for example, The Great Encyclopedia of the Occult consulted in the film. 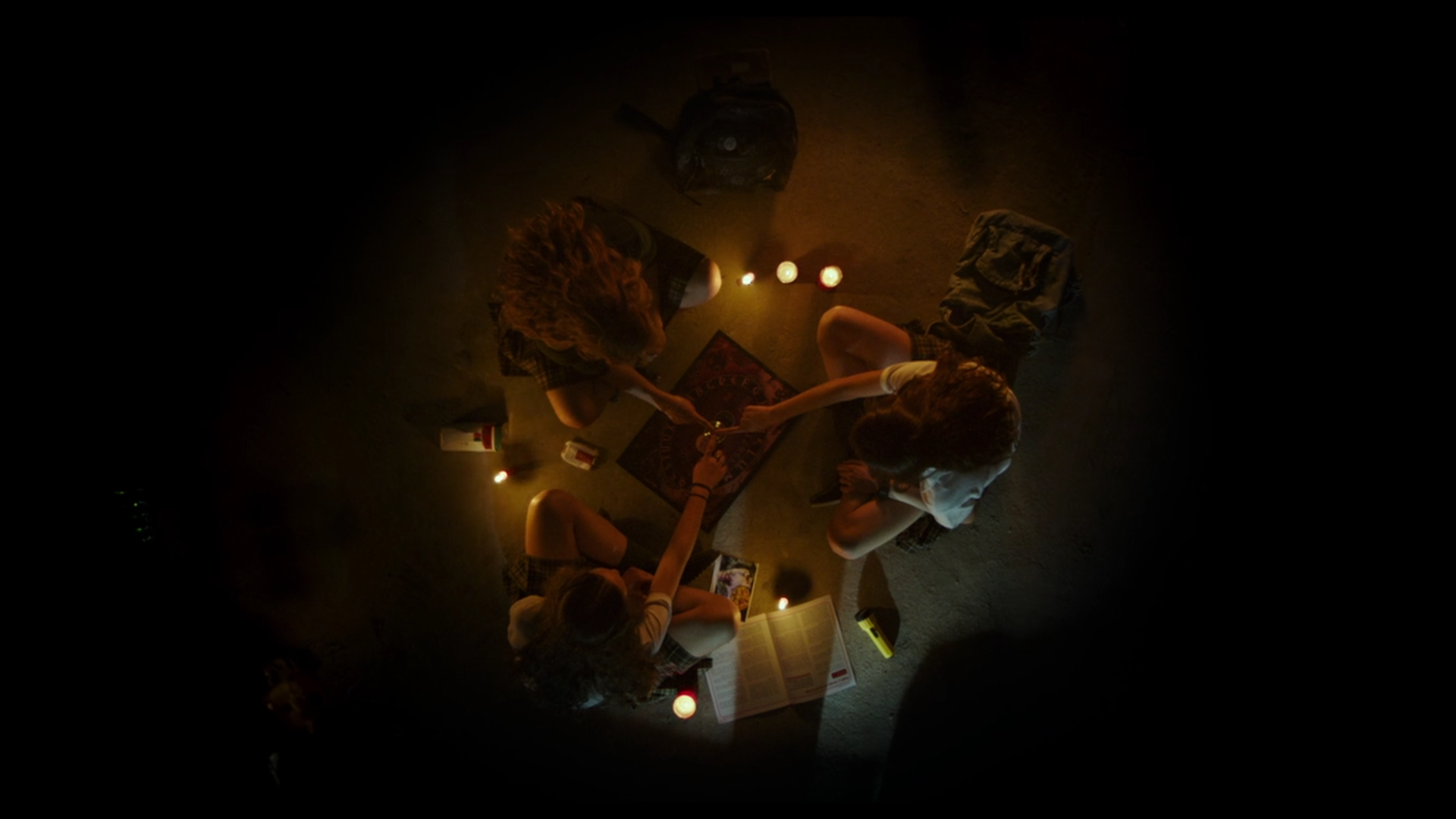 However, nothing else about the teens’ Ouija experience is as fun as occult reference materials when, instead of reaching the spirit of Veronica’s father, they summon a malevolent demon.  As the board breaks, book catches fire, and the lights flicker off, Veronica seems to be possessed.  When she lies on the floor whispering to herself, then suddenly sits up and screams, all bets are off.  Veronica’s friends are well and truly freaked the fuck out.

At home, things don’t get much better.  Veronica seems to have episodes of being possessed, and both sees and hears a presence in their apartment at different times.  The lights flicker, doors slam open and shut, the TV turns on by itself.  When Veronica gives her brother a bath, the faucet mysteriously turns on with scalding water, giving him burns on his body.

The next day at school, Veronica has a conversation with an elderly blind nun known as Sister Death, who also happens to be a chain smoker.  The Sister warns her there is a presence with her that she must send back from whence it came.  Veronica is also tasked with keeping her siblings safe from the demon she inadvertently summoned. 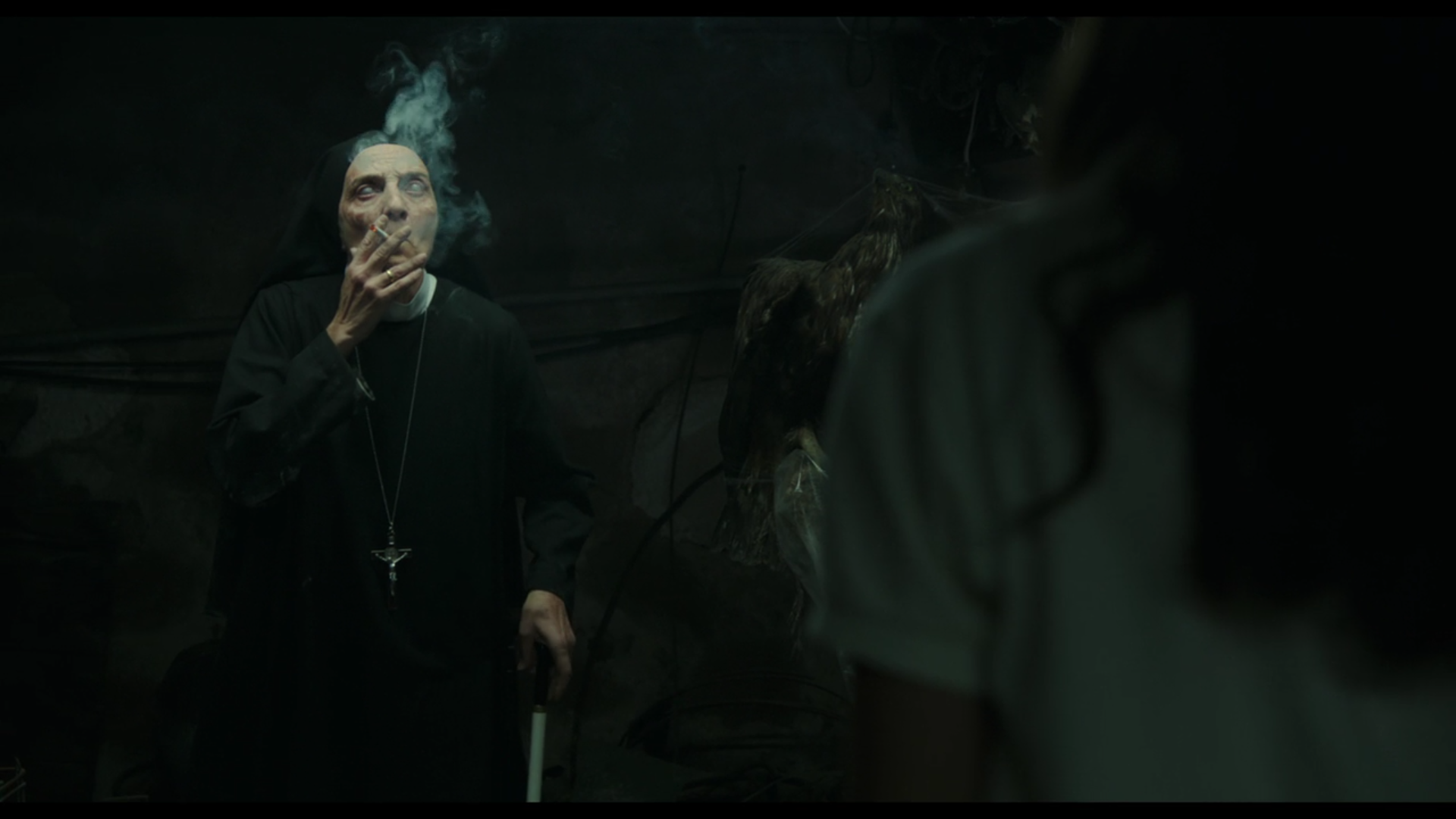 Veronica gets serious about using pagan symbols to protect her siblings and insists all 4 camp out together in the living room that night.  Riled up about demons in the house, the children are terrified when their mother comes home and demands to know what is going on.  Of course Veronica gets a stern lecture because parents just don’t understand.

Determined to be rid of the demon, Veronica tries to enlist the help of her friends in summoning it and sending it away.  Still traumatized by their Ouija session gone wrong, Veronica’s friends refuse to go near the board ever again. 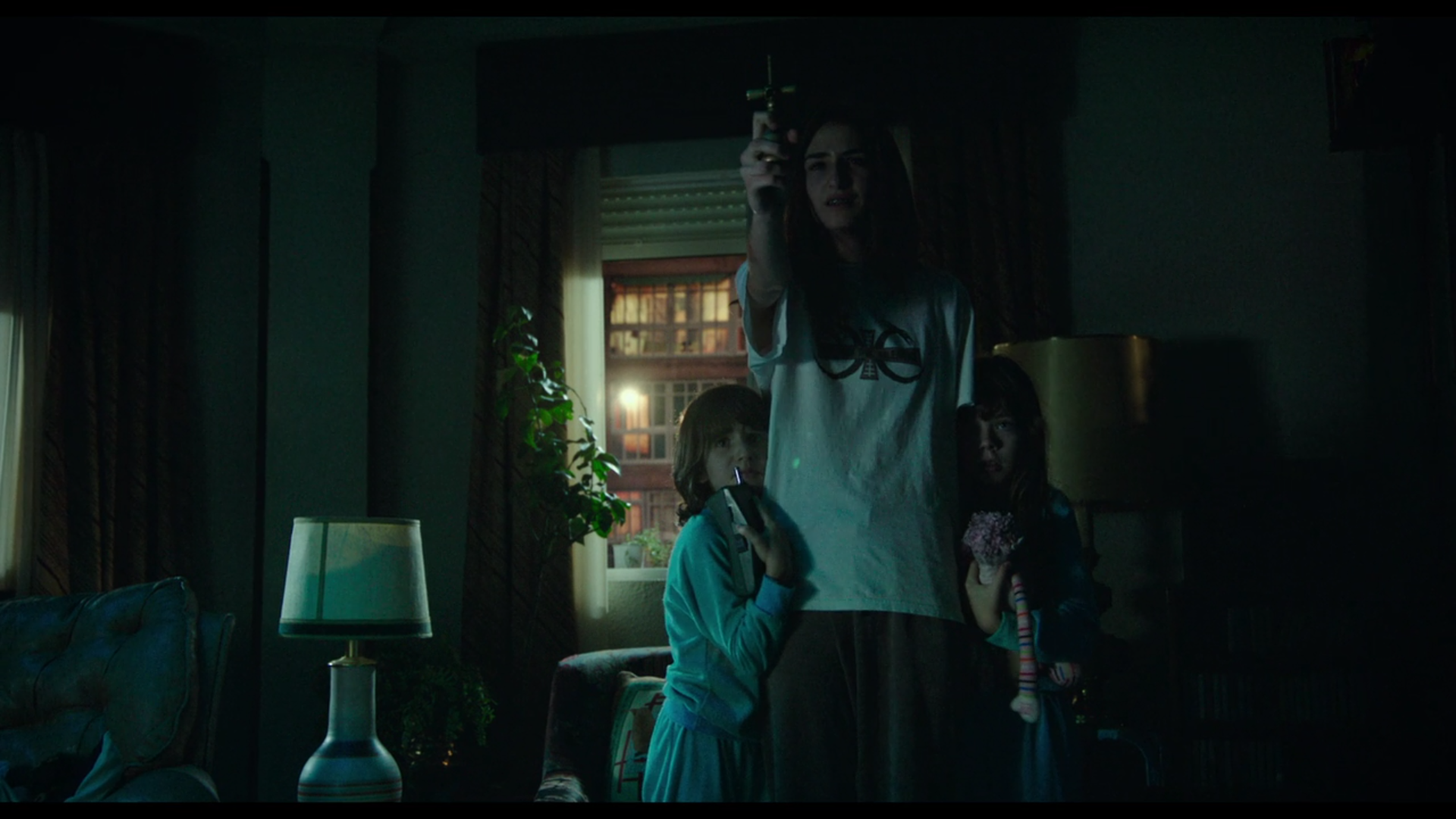 Still intending to stick with her plan, Veronica decides she will send the demon back with the help of her younger siblings.  And of course things go horribly, horribly wrong from there, resulting in the infamous real life police report.

What terrors in the report could have traumatized the lead detective on the case and spawned rumors that the house is haunted?  You’ll have to watch the film to find out!  Or I guess you could Google it.

The premise here is decent and not your formulaic teens who shouldn’t have fucked with a Ouija board horror.  Veronica has depth and is quite sympathetic as a protagonist who wants to connect with her father, later transformed into fierce older sister and protector of her siblings.

However, this just isn’t particularly scary.  There seems to be a checklist of cliche signs of a  demonic possession this film is determined to cross off.  Honestly, the creepiest scene for me was one where Veronica dreams her siblings are attacking and eating her…but we’ve all been there, right?

I absolutely loved Sister Death and her doom and gloom warnings–even if they are too little too late.  If we get a prequel about her, I will be on that so fast.

Would my blog wife summon this one again or send it back ASAP?  Read her review here to find out!