After a brief interruption (caused by an absolutely vile stomach bug), Blog Free or Die Harder is back with a vengeance!

Can we please agree that this week is over, though?  It’s been a rough one.  Let’s all just give up and stay home tomorrow.  I will if you will.

This week is Christa’s pick, so I’ll try not to be rude about it.  But I’ll probably be at least a bit sarcastic.

Katharine Isabelle swears vengeance on Christopher Lloyd but is a bit fuzzy on the details.

Ugh, I don’t know where to start, you guys.  This film is ambitious enough to claim it’s a mix between Memento and Kill Bill on its promo poster, when it’s really more in the vein of Hobo with a Shotgun.  Without the hobo.

As the film opens, Katharine Isabelle (Gwen), is having horrible flashbacks in a diner but no recollection of the precise unfolding of events nor how she got there.  Her hand is bandaged and bleeding for unknown reasons, and she is visibly shaken when she sees cops sitting in a corner booth.  She draws attention to herself when the contents of her backpack go flying:  gumballs, gun, and all.  Oops.

I admittedly understand very little about firearms or the impulse to use them, but basics:  don’t put your finger on the trigger unless you want to shoot someone.  Don’t fucking do it.

Guess what Gwen does.  Just try.

She accidentally shoots a waitress BECAUSE SHE HAS HER FINGER ON THE FUCKING TRIGGER.  Gwen feels really bad about this obv, but still.  Easily preventable death that makes Katharine Isabelle do this horrible doe-eyed guilt thing for a large chunk of this film.  I much prefer to see her killing remorselessly.

All of this results in Gwen going on the run from the cops and, as it turns out, Thug Christopher Lloyd.

BUT WAIT—there’s more.  This film’s end game is to come full-circle, so we have two timelines:  the present, in which Gwen is trying to remember what happened, and the past, which unfolds shortly before Gwen lost her memory.  It’s basically scared Gwen vs. sexy Gwen.  Ginger pre- and post-snap.

In the past, sexy Gwen collapses by the side of the road until some poor unfortunate dude with hillbilly facial hair stops.  She kills him in a very Ginger Snaps­-y kind of way (get used to the questionable Ginger Snaps references b/c they’re not going away).

There are also flashbacks to Gwen with some bearded hipster dude.  Unsurprisingly, the revenge part of this film comes from someone (Christopher Lloyd) killing this guy.  I think this speaks more to the state of revenge films than my own twisted psyche, but I kept waiting for there to be a better reason for Gwen to seek vengeance.  Christopher Lloyd only killed one person you love and that’s enough for you to go on a violent shooting rampage?  You have to at least decimate someone’s village to make a meaningful revenge film any more.  Also I just sort of hated the love of Gwen’s life because (a) everyone kept calling him the love of her life, and (b) he reminded me of that awful lumberjack love interest of Sarah’s in Orphan Black.

So anyway.  Let’s pick up the pace, shall we, or we’ll be here all night.  Gwen recalls that Christopher Lloyd (Cyrus) didn’t handle it well when she broke the news that she was leaving with her lover, Aster.  Cyrus, in fact, flipped a lid and killed Aster before the two could escape.

Swearing vengeance, Gwen, aka Flamingo (seriously), teamed up with this really annoying guy to kill Cyrus.  Apparently Cyrus killed this guy’s sister, which has not improved his personality.  He’s kind of like if Aziz Ansari fell flat with every single joke and also killed people. 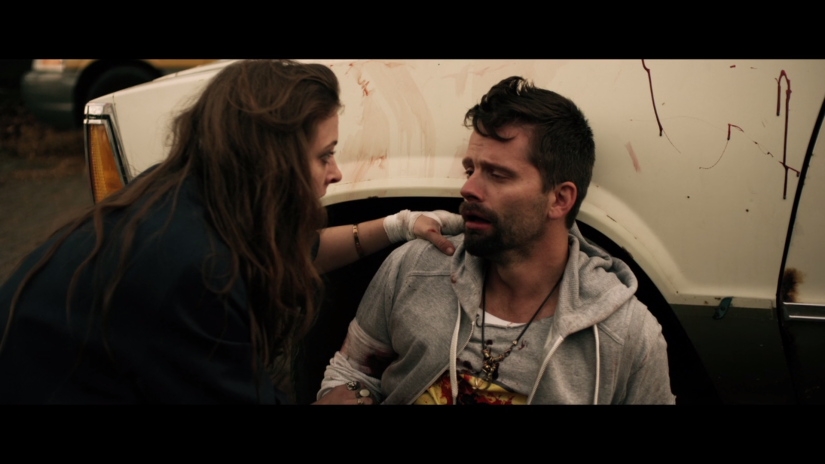 However, shit keeps getting in the way of their plan for revenge:  Gwen forgetting everything, Gwen getting arrested, and this guy (so annoying I can’t even remember his name) getting shot in the chest.  I was pissed at this point because he made the most irritating dying sounds I’ve ever heard but I thought, “Well, at least that’s the last we’ve heard from him.”  NO.  WRONG.  The fucked timelines of this film meant this dude could come back and talk even after dying.

From this point out, there is a lot of back and forth between past and present as the two timelines merge.  Gwen goes to Flamingos, we discover what Flamingos is, why there is so much sexy milk in this film, and what happened when Gwen confronted Cyrus at the bowling alley.  Gwen also eats a lot of burgers and breakfast foods.

I don’t want to give too much away regarding the ending (even though I think the plot twist is more WTF in more of a The Village way rather than an Inception way).  We’ll just say there’s a final confrontation between Gwen and Cyrus b/c this is a revenge flick, for fuck’s sake.

Honestly, it would’ve been 1 except for Katharine Isabelle.  I don’t know if this film was supposed to be funny or not?  That’s always the most painful kind of film to watch.

And Christopher Lloyd was not a particularly believable thug.  I’m not sure if that’s a good or bad thing.

Is Christa swearing revenge on this film or would she join forces with it to take down shady thugs?  Find out here!

Voted most likely to ruin her brain with junk films. View all posts by jilliansheilas

Blog banner is a derivative of images by users Sabina Music Rich and Jeremy Yap on Unsplash, and Pexels on Pixabay